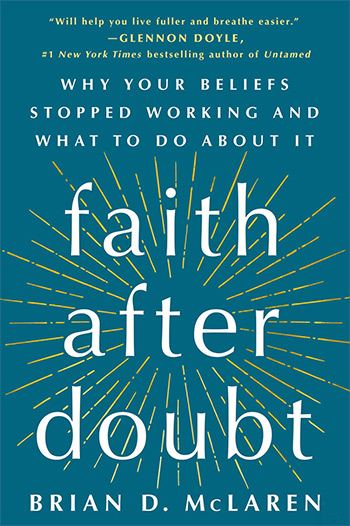 Sixty-five million American adults alive in the United States today have already dropped out of active religious attendance, and that number grows by 2.7 million every year. This environment has inspired legions of publications, including Barbara Brown Taylor’s Leaving Church, John Shelby Spong’s Unbelievable, Sam Keen’s In the Absence of God, Diana Butler Bass’s Christianity after Religion, and my own Doubter’s Parish website. In his new book, Brian McLaren makes an important addition to this growing genre of resources addressing religious angst in America.

Like many religious leaders, McLaren wears multiple hats. In Faith after Doubt, at least five roles emerge. As usual, McLaren the author provides a timely, relevant, and well-written book that is well worth the investment of time and money.

In his opening remarks, McLaren the pastor recounts stories of people grappling with faith in the 21st century. He tells about an evangelical teenager struggling with his sexuality, a thirtysomething mainline pastor who no longer believes the creeds, a fundamentalist college student agonizing over the theory of evolution, a nun who finds that she cannot pray, a seminary professor who doesn’t believe in the content of his lectures, and an eight-year-old boy who can’t comprehend why God killed off innocent animals in a worldwide flood.

Pastor McLaren, himself a doubter, lovingly proclaims to readers, “You and I don’t have to keep our doubts a secret any longer.” Although he freely acknowledges the deep pain religious doubt brings, he promises it can lead to profound growth. For faith strugglers stumbling through a “dry and thirsty land where there is no water,” McLaren’s pastoral words and testimony provide an oasis of life-giving refreshment.

Next, McLaren the educator elaborates “the four stages of faith development” that he has outlined in previous books. Stage one is simplicity, which sees God as the big person in the sky who sets rules, requires obedience, and mandates punishments when the rules are broken. Stage two is complexity, which allows for broader perspectives, open-mindedness, and mystery. Stage three is perplexity, a painful time of relativism, severe doubts, cynicism, and disruptive dark nights of the soul. Stage four is harmony, a post-doctrinal stage of faith that is not about religious beliefs but about “the more excellent way” of living a life of love.

McLaren believes that all people can progress through these four stages in life. Harmony is the pinnacle, the stage in which believers minimize doctrines, embrace paradox, exude humility, welcome diversity (including people of all faiths and even people with no faith), care about the common good, and seek to live out “faith that expresses itself in love.” Throughout this section of the book, McLaren argues that the primary and necessary passageway from each stage to the next is doubt.

Next we see McLaren the strategist as he reflects on building stage four faith communities for the future. He acknowledges that only a few such communities currently exist. However, they are growing in number, usually in nontraditional settings. Stage four communities need to be “big on action, big on love, small on beliefs, and small on bureaucracy.”

The problem, says McLaren, is that the United States has 350,000 communities of belief and few communities of love. Since most churches live in stage one or stage two and dedicate the majority of their resources to their buildings and their beliefs, McLaren believes that few traditional churches will ever make the shift to stage four.

Pastors who attempt to lead such a transformation will not be treated kindly by their congregations or their institutional leaders, most of whom will vehemently oppose such radical changes. Instead of emerging from traditional churches, most stage four faith communities will need to be created as new wine in new wineskins. In this strategic section, McLaren lays out a tentative five-step plan for birthing stage four communities, points to a few examples, and briefly muses about doing a new kind of stage four theology.

In the concluding chapters of the book, we see McLaren the visionary. He believes that stage four faith communities can save humanity and the planet by teaching people how to “live well with ourselves, one another, and the earth.” McLaren dreams of a new and better faith that helps people “rejoin the community of creation, the network of shalom, the ecosystem of harmony.”

I found Faith after Doubt engaging, substantial, and helpful. However, that doesn’t mean I don’t have some quibbles. For example, I wanted more of McLaren the pastor. Millions of doubters need a field book for dealing with their religious angst. Although McLaren offers them significant help, I wanted to see more detailed strategies for traversing the journey. I also wanted more of McLaren the strategist, offering additional practical guidelines for developing stage four communities.

Finally, I would have appreciated pointed reflections on problematic beliefs for stage four faith, from a theistic concept of God to a divine Christ. If we are going to adopt a “faith beyond beliefs,” we need to be fully transparent about what that means for traditional doctrines—as difficult as that may be to broach. In short, I would like McLaren to write further on this crucial subject. I recently learned that he’s working on a sequel to Faith after Doubt, which is welcome news.

Still, there’s plenty in this book for readers to mull over—and plenty to give them hope. As McLaren puts it, “Doubt need not be the death of faith. It can be, instead, the birth of a new kind of faith, a faith beyond beliefs, a faith that expresses itself in love, a deepening and expanding faith that can save your life and save the world.” Amen to that.

This review was originally published in The Christian Century.