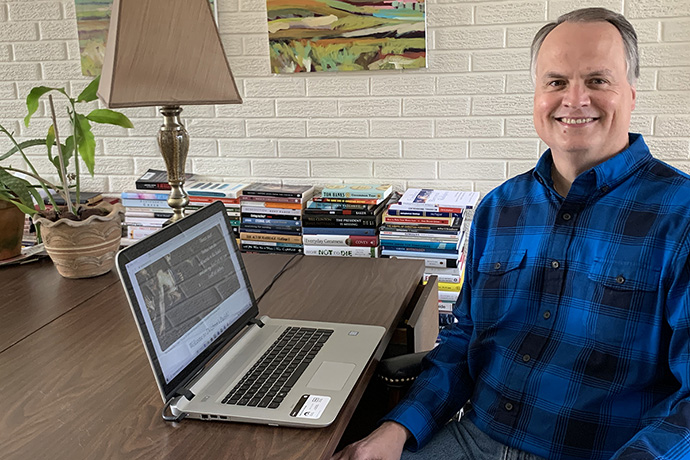 The golf course doesn’t beckon to the Rev. Martin Thielen in his retirement from United Methodist ministry. Nor does woodworking or tending a vegetable garden at his Cookeville, Tennessee, home.

What Thielen likes to do is write — especially for readers with doubts about Christian faith.

He’s been in their shoes. Still is.

“I’m very much a lover of Jesus, but I struggle with some of the traditional beliefs myself, and I certainly struggle with institutional religion,” he said.

Thielen, 64, last month launched Doubter’s Parish, a website where skeptics and what he calls “thinking Christians with questions” can read his writings and contact him.

The apostle Thomas, as in Doubting Thomas, is the site’s patron saint. Its touchstone verse is Mark 9:24: “Lord, I believe; help my unbelief!”

Thielen is a former Tennessee Conference megachurch pastor and a published author. His 2011 book “What’s the Least I Can Believe and Still Be a Christian?” has been a hit by religion book standards, selling about 50,000 copies.

Doubter’s Parish is a retirement project and a labor of love, offering free access to Thielen’s sermons, essays, blog posts, book excerpts and a novel he wrote about a pastor’s faith crisis.

“Through the years, I’ve always had a heart for doubters,” he said. “I’m not trying to be Mr. Answer Man, but I do want to be a voice for those that struggle.”

Thielen’s own long faith journey has had its twists.

He describes the Air Force family in which he grew up as marred by dysfunction. At age 15, he went to church for the first time — a Southern Baptist church in Muskogee, Oklahoma, where the family finally settled.

“That church became, for me, my family,” he said. “They loved and affirmed me.”

Thielen answered a call to ministry, studying at a Southern Baptist college and earning graduate degrees at Southern Baptist seminaries. He served local SBC churches and became a staff member at the Sunday School Board of the SBC, which became LifeWay Christian Resources.

But as early as college, he began to have doubts about Christian fundamentalism. A professor recommended Anglican Bishop John A.T. Robinson’s 1963 book “Honest to God,” and Thielen recalls the huge impact it had on him. 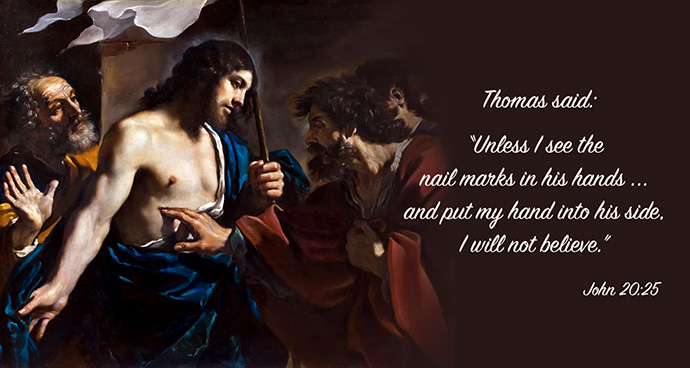 The Doubter’s Parish website features a painting of the apostle Thomas, otherwise known as Doubting Thomas, examining the wounds received by Jesus on the cross. ‘The Incredulity of Saint Thomas’  by Guercino (Giovanni Francesco Barbieri): oil on canvas, 1621.

“The answers he gave were not as important as the process of thinking and asking the hard questions that my evangelical community was afraid to ask,” he said.

Thielen found himself out of sync with Baptist conservatives who called for wives to submit to their husbands, objected to women in the pulpit and decried homosexuality as sin.

The conservatives’ successful fight for control of the SBC led him to leave the Sunday School Board first and, eventually, the denomination.

In 1994, Thielen was in Nashville, taking courses at Vanderbilt Divinity School and checking out mainline denominations. He cold-called Bishop Ken Carder, now retired but then leading the Tennessee Conference.

Carder was between meetings and took the call, which Thielen remembers lasting about an hour. Carder followed up by assembling his cabinet to meet with Thielen.

“He came prepared!” Carder said by email. “We learned very quickly that he had read the Book of Discipline and was very conversant with and committed to the Wesleyan understanding of grace. Not only did he intellectually understand grace, he exhibited the qualities of a grace-formed life.”

Carder quickly appointed Thielen to a three-point charge. Thielen would go on to be a United Methodist elder, leading some of the conference’s biggest churches, including 8,000-member Brentwood United Methodist, near Nashville.

Thielen retired from full-time ministry in 2018, ready to set aside the stress of big-church leadership for more time writing. But within weeks, at a district superintendent’s request, he was filling in for the ailing pastor of Granville United Methodist Church, in north central Tennessee.

The pastor didn’t return and Thielen kept serving the small rural church for about two years, far enough into the COVID-19 pandemic to preach at drive-in services. He was glad to be where he could know all the members by name and learn their stories.

“I call it my good-ending pastorate,” he said.

Now, though, Thielen is focused on Doubter’s Parish.

One reason is that throughout his active ministry, he met with people who shared, in some cases confessed, their doubts about Christianity. They included an atheist who, after talks with Thielen, moved to agnosticism and finally to openness to Christian faith.

A question from that man inspired the title for the book “What’s the Least I Can Believe and Still Be a Christian?”

Thielen says his encounters with skeptics and strugglers — including fellow pastors — grew in number through his ministry years. He points to studies showing an increasingly secular U.S.

With Doubter’s Parish, Thielen takes up the specific concerns he’s heard, such as reconciling evolution and modern science generally with Christianity. He writes about the Bible, intercessory prayer and failures of institutional religion, such as the Catholic clergy abuse scandal.

He’s plainspoken about infighting among United Methodists and other mainline Protestants over homosexuality (he’s for full LGBTQ inclusion while lamenting the demise of a “big tent” United Methodist Church) and the Christian right’s embrace of partianship.

Thielen believes the church has, with much of its conduct, turned off many it might otherwise attract.

“I’m beginning to find a large number of people who are post-institutional church. But they’re not post-Jesus,” he said.

Thielen’s is a progressive Christian perspective, presented unapologetically, but with humility. He’s often quite personal in his writing.

“Like many 21st-century believers, I have plenty of unbelief, especially around traditional doctrines like a literal Bible and a humanlike God of supernatural intervention,” Thielen says in a piece called “On Losing and Keeping Faith.” “However, I also have plenty of belief — especially in Jesus, healthy Christian community, Christian practices, Christian values and Christian mission.”

Not all of Doubter’s Parish addresses doubt. One whole section offers advice and sample sermons for clergy.

So far, and without promotion, about 800 people have signed up for Thielen’s newsletter. He got an encouraging note about the effort from renowned Christian author Barbara Brown Taylor.

He’s prepared for pushback from Christian traditionalists, but what’s mainly been coming in are questions, including about the pandemic.

“Last week I received this heartbreaking email from a woman,” Thielen said. “Someone she had loved had just died of COVID, and she wanted to know, ‘Is it still possible to believe in a providential God in the midst of all this?’”

The retired pastor went right to work on an essay called “Providence and the Pandemic.”

Hodges is a Dallas-based writer for United Methodist News. Contact him at 615-742-5470 or newsdesk@umcom.org.